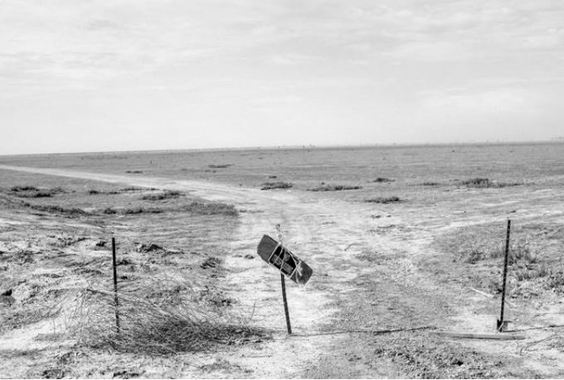 A dry pasture near Alpaugh, July 7, 2014. Photograph by Matt Black
From the Preface: The following report began as an effort to understand the hydrologic cycles of Sequoia and Kings Canyon National Parks, but it has turned into something even more important. The pages that follow provide priceless insights into an entire region: the Tulare Lake Basin of Central California. This distinct geographic zone contains not only the southern Sierra Nevada with its twin national parks but also major cities, a significant part of the richest agricultural area in the United States, and the bed of what was less than two centuries ago the largest freshwater lake in the western half of the conterminous United States.

Water, through both its presence and its absence, affects this region profoundly and in distinctive ways. The Tulare Lake Basin has a number of characteristics that make this particularly true. First, the region is close to the Pacific Ocean and thus well within range of intense oceanic storms. It has a Mediterranean climate which sees the great majority of its precipitation fall during the winter months of November through April. A further factor is that, because the region falls within the mid-thirties latitude range, it occupies the highly variable frontier between the wet winter climate of the Pacific Northwest and the often very dry winter climate of Southern California and northwestern Mexico. Adding more interest is the presence of the high-elevation terrain of the Sierra Nevada (including Mt. Whitney), which means that when the right kind of disturbances do arrive, extremely heavy precipitation can be extracted as the storms move eastward. And finally, the region’s major rivers — the Kings, Kaweah, Tule and Kern — flow into an interior basin rather than into the ocean. This last fact is true of no other significant area along the immediate Pacific Coast of the United States.