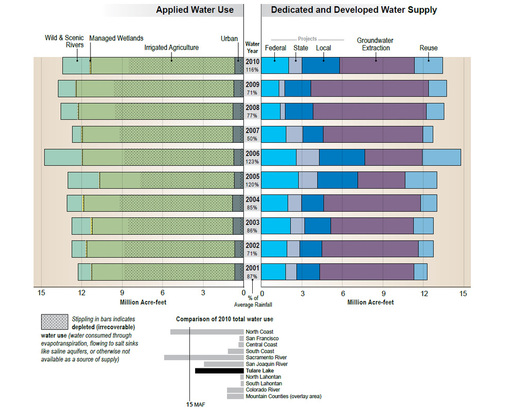 Tulare Basin Applied Water Use and Supply Sources. Source: California Water Plan Update, Volume 2, Tulare Lake. (Click to view larger image.)
As the dryer, hotter climate of the valley and foothills creeps up the mountain slopes, not only does the forest composition change, but fire risks increase and cold-temperature snow storage shrinks. Collaborative problem-solving processes such as Integrated Regional Water Management planning are working to address these issues. We can all support these efforts by learning more about our water supply and participating in efforts to conserve it.

The California Department of Water Resources has over a dozen staff members working full time on climate change. Regionally-based climate change specialists provide information about current and projected impacts of a warming climate and work with local water managers to identify strategies to deal with them.  “While this challenge is very daunting, the encouraging news is California water managers are already accustomed to dealing with high variability and alternating periods of drought and floods. The key to adapting to future climate change will be working across non-traditional boundaries and embracing an integrated resource management approach”, according to Michelle Selmon, a member of DWR’s climate change staff.

The California of tomorrow may look a little different than the California of today, and grass landscaping will become a relic, but if we work together, based on sound information and knowledge, then we’ll find the right balance.

The quantity of water that enters the Tulare Lake watershed varies greatly as a result of California’s irregular precipitation patterns. In years of minimal precipitation, when surface water flows are reduced (limiting water imports and spring run-off from the mountains), groundwater pumping makes up the difference to meet demand and achieve regional water balance. How large is that difference? Between 2001 and 2009, the percentage of groundwater use fluctuated between 33 and 70 percent of total water supply.[v]

Understanding how variable the region’s water supply is is a requirement to discussing the more heated side of the issue: demand. Water demand is usually assessed based on three general categories: agriculture, urban, and environmental uses. These figures get reported in different ways, often omitting relevant details, which creates confusion. The California Department of Water Resources reports figures for applied water, which is, “the total amount of water that is diverted from any source to meet the demands of water users.”

Each hydrologic region in California has vastly different splits on their water use. The Tulare Lake watershed is the largest agricultural region in the state, home to about 3 million acres of irrigated agriculture (the total watershed is about 11 million acres). Therefore, its agricultural water consumption is significantly higher than every other region of California. Between 2001 and 2010, the average percentage of agricultural water use was 82.5% (about 10.8 million acre feet out of a total of 13 million acre feet in applied water).[vi] With a relatively small, though steadily growing population (2.27 million people in 2010), its share of urban and industrial water use was only 5.7% over the same 10-year period. Environmental demand, mainly used for wild and scenic rivers, consumed 11.9%, of which .07% was used for managed wetlands. For comparison, the state’s average during the same ten-year period was as follows: 42.4% for agriculture, 11.1% for urban, 46.5% for the environment (including wetlands, instream flow, required Delta flows, and wild/scenic rivers).[vii]

The bigger picture, however, is that demand exceeds supply in all but very wet years. In dry years like 2009, the difference between water entering the region (via precipitation and imports) was negative 5.36 million acre feet of water. In other words, the Tulare Lake watershed demand exceeded supply by 42% (based on applied water and total water leaving the region, including that by evaporation and runoff). The difference is made up by groundwater pumping, resulting in significant overdraft.

“The biggest challenge this region faces is chronic water shortage, as has been manifested by groundwater overdraft,” said Moss.

The region’s water imbalance is not news. About 80 years ago, water engineers began planning for the Central Valley Project, and later, the State Water Project, to address groundwater overdraft and facilitate agricultural and urban growth. Farmers banked on a steady supply of water imports. However, droughts, urban growth, crashing aquatic ecosystems and regulatory changes collided with that expectation, resulting in ongoing groundwater overdraft that now threatens long-term water supply. Places like Lindsay and Terra Bella, which rely heavily on surface water imports, have been having an exceptionally tough time. “Ten thousand acres of citrus were taken out of production last year. This year, it’ll be much more dramatic,” said Moss of the drought’s ongoing impact to agriculture, especially in areas relying primarily on surface water.

Of the region’s total agricultural acreage, about half a million is planted in almonds and pistachios. The next most widely planted crops are vineyards (346,800), corn (342,800), and alfalfa (315,700). Year-round crops like nut trees, grapes, and other orchards put additional strain on the region’s precarious balancing act in drought years because they require water each year, regardless of precipitation patterns. But economically, these crops have more value.

With the new Groundwater Sustainability Act, long-term sustainability is no longer simply a hope, it is the law. It’s anyone’s guess what that will look like by 2040 when the legislation’s sustainability measures are intended to be actualized, but no doubt, things will look very different than they do now. Drastic measures will need to be implemented in a region like the Tulare Basin, which relies so heavily on groundwater supplies to meet demand. Moss estimates that the Tulare Lake Basin will likely have to take about half a million acres out of production, which is about 16% of the region’s total production. Concerning the process of achieving groundwater to sustainability, he said, “It’s not going to be cheap. And it’s not going to be fun.”

On a more hopeful note, David Mas Masumoto – award-winning author and Fresno-based farmer – recently wrote for the Fresno Bee, “We are witnessing a revolution and we must cultivate our resiliency. It makes for a great story and we are living it with every drink.” [viii]