The Tulare Basin offers a safe harbor for 53 threatened, endangered, or sensitive plant species, the majority of which are endemic to California. Over the past century, these plants have declined significantly due to habitat loss, fragmentation, and degradation resulting from human modifications to the landscape for urban, agricultural, mineral, and other needs.

Today these sensitive plants grow in a limited range or are rare throughout their range. Remaining populations face a high risk of extinction from additional threats, such as:


The Tulare Basin Wildlife Partners (TBWP) is working to protect and restore our native plant communities to keep our watershed healthy now and for future generations.
Listed below are descriptions for several of the Tulare Basin's sensitive plant species: 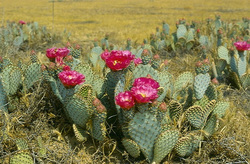 Bakersfield Cactus (Opuntia basilaris var. treleasei); Federally & State Endangered, CNPS 1B.1
A perennial, low-growing cactus, the Bakersfield cactus spreads to form extensive thickets of fleshy, flattened, green beavertail-like pads with showy magenta flowers. The dry fruits are the size and shape of small eggs and may contain grayish-white seeds. Eye-spots, which are rounded structures that contain barbed bristles, dot the pads and fruit. This plant typically grows in arid environments in sandy soils, although gravel, cobbles or boulders also may be present. The Bakersfield cactus, found only in a limited area of central Kern County near Bakersfield, inhabits flood plains, ridges, bluffs and rolling hills in saltbush scrub plant communities, and occasionally in blue oak woodland or riparian woodland in elevations up to 1,800 feet. Limited patches of this cactus remain in the Tulare Basin. 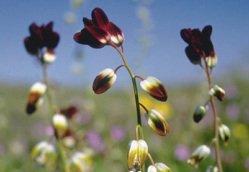 California Jewelflower (Caulanthus californicus); Federally & State Endangered, CNPS 1B.1
California jewelflower, an annual herb in the mustard family, grows about 12 inches tall and features hairless, branching stems and wavy-margined leaves in a basal rosette. Maroon buds cluster at the tip of the stem and contrast with the translucent, white flowers below which bloom March to May. California jewelflower produces flattened, sword-shaped fruits. This plant grows in subalkaline, sandy loam soils on terrain with up to 25% slope, from 225 to 2,700 feet in elevation. This herb is found in several plant communities, including California annual grassland and saltbush scrub and occurs within a dense herbaceous cover comprised of non-native grasses and native plant species such as annual fescue, clovers, red maids and goldfields. Endemic to California, California jewelflower historically grew in Fresno, Kern, Tulare, San Luis Obispo, Santa Barbara and Ventura counties. Today, populations are confined to just three areas west of the San Joaquin Valley, and outside the Tulare Basin.
top 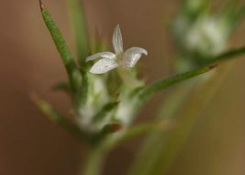 Hoover's eriastrum (Eriastrum hooveri); Federally Delisted, CNPS 4.2
Hoover's eriastrum, an inconspicuous annual in the phlox family, grows on wiry stems with thread-like leaves that may have two narrow lobes near the base. Tufts of woolly hair hide tiny, white to pale blue flowers, which bloom from March to June in years of above average rainfall. This plant prefers silty to sandy soils with limited competition from grasses and forbs, though it adapts well to other habitats. Hoover's eriastrum lives in alkali sinks, washes, slopes and ridgetops from 165 to 3,000 feet in elevation in a wide variety of plant communities with shrub cover less than 20%. Prior 1986, this plant was known from only 19 sites in Fresno, Kern, Santa Barbara and San Luis Obispo counties. Once considered federally threatened, Hoover's eriastrum is now known to grow in Kings and San Benito counties and a number of additional sites within its previous range. The Tulare Basin hosts several metapopulations and several other occurrences of this rare flower. 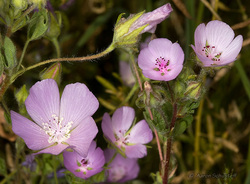 Kern Mallow (Eremalche kernensis); Federally Endangered, CNPS 1B.1
An arid-land annual herb, the Kern mallow's form varies from single-stemmed to multiple-stemmed, with the central stem erect and the lateral stems trailing along the ground. This plant, a member of the mallow family, features white to pale lavender flowers with five petals and wheel-shaped fruits divided into single-seeded segments. Flowering and fruit production begins in March and may continue into May. Kern mallow grows in alkaline, sandy loam or clay soils from 300 to 900 feet and its population size varies with rainfall. This plant inhabits saltbush scrub communities where shrub cover is less than 25%, under and around saltbush (Atriplex spp.) and in patches with other native and non-native grasses and forbs. The Kern mallow grows in a single metapopulation across 40 square miles at the eastern base of the Temblor Range in the Lokern area of western Kern County.
top 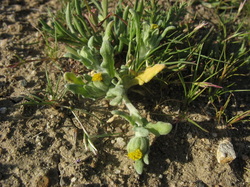 San Joaquin Woolly Threads (Monolopia congdonii); Federally Endangered, CNPS 1B.2
San Joaquin woolly-threads, an annual herb in the sunflower family, features tiny yellow flower heads clustered at the tips of erect to trailing stems covered with tangled hairs. Flowers bloom between late February and early April and produce tiny, one-seeded fruits with up to 2,500 seeds per plant during wet years. San Joaquin woolly-threads grow on sandy to silty, neutral to subalkaline soils from 200 to 2,600 feet. San Joaquin woolly-threads inhabit a variety of grassland and saltbush scrub communities in microhabitats with less than 10% shrub cover and a sparse to dense cover of grasses and forbs. Endemic to the southern San Joaquin Valley and surrounding hills, this plant historically ranged from southern Fresno and Tulare counties to Bakersfield and the Cuyama Valley. Today, San Joaquin woolly-threads survive in four metapopulations and several small, isolated populations, with several locations in the Tulare Basin. 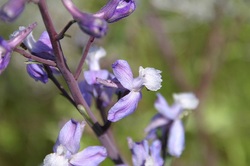 Recurved Larkspur (Delphinium recurvatum); CNPS 1B.2
Recurved larkspur, a perennial herb in the ranunculus family, grows seven to 34 inches tall and features beautiful light blue flowers, which bloom March to May. Its sepals are usually curved back, the trait that gives this plant its name. The deeply lobed leaves of the recurved larkspur are mainly basal, with smaller leaves further up the dark purple stem. This plant inhabits poorly drained, fine alkaline soils from 90 to 2,400 feet in grassland, saltbush scrub and foothill woodland communities. The recurved larkspur grows only in California's Central Valley and is declining.
top