Wildlife of the Tulare Basin

The Tulare Basin hosts an amazing concentration of endangered, threatened, or sensitive animal species, including nine invertebrates, three amphibians, five reptiles, 42 birds, and 13 mammals. Some animals are only found in the Tulare Basin, others are endemic to California and a few range throughout western North America.

Over the past century, modifications to the Tulare Basin's land and water have resulted in the critical status given to these animals. Loss, fragmentation, and degradation of wetlands and uplands have reduced the availability of food and other resources, while restricting and isolating populations. A variety of factors contributed to habitat loss and continues to threaten these species:


The Tulare Basin Wildlife Partners works to protect our unique and exciting animal diversity, resulting in a watershed that is more vibrant, resilient, and healthy for people and nature alike.
Listed below are descriptions for several of the Tulare Basin's sensitive animals:
Blunt-nosed Leopard Lizard (Gambelia sila); Federally & State Endangered 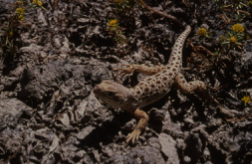 The largest garter snake, the giant garter snake grows to over five feet long. Its three distinctive yellow stripes stand out against its overall brownish color. Giant garter snakes feed primarily on carp, minnows, mosquitofish, Pacific tree frogs, and bullfrogs. Their ideal habitat contains dense cattails and bulrushes found in marshes and sloughs for escape from predators; ponds and small lakes in which to forage and seek cover; grassy banks and open areas along the water's edge to allow for basking; and upland habitat with access to burrows for hibernation and escape from flooding. Endemic to California's Central Valley, giant garter snakes historically ranged from Butte County to Kern County but now exists in only 13 separate populations, with none remaining in the Tulare Basin.
top
California Red-legged Frog (Rana aurora draytonii); Federally Threatened & California Species of Special Concern 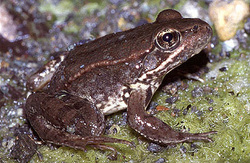 The largest native frog in the western United States, the California red-legged frog grows up to five inches long and features dark spots on its back with a red abdomen and hind legs. Frog larvae eat algae, while adults eat invertebrates and even Pacific tree frogs and mice. The California red-legged frog occupies a fairly distinct habitat, combining both aquatic and riparian components, such as dense, shrubby or emergent riparian vegetation closely associated with deep or slow-moving water. During intense summer heat, these frogs aestivate, or enter a dormant state, in small mammal burrows and moist leaf litter in well-vegetated terrestrial areas within the riparian corridor. Unique to California, this frog historically ranged from the coast to inland areas throughout much of the state. While still locally fairly common in some areas of the state, the California red-legged frog is no longer found in the Tulare Basin.
Swainson's Hawk (Buteo swainsoni); State Threatened 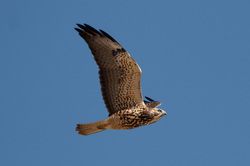 Swainson's hawk, a large bird distinguished by its long, narrow, pointed wings, displays a wide variation in plumage color and pattern. In the summer, these hawks eat insects, birds, and small mammals, occasionally taking reptiles, amphibians, and other invertebrates. During migration and in the winter, their diet consists mainly of insects. Swainson's hawks prefer open habitats, such as grasslands, with scattered trees for perching and nesting. Swainson's hawks also favor irrigated agricultural areas, particularly alfalfa fields, and exploit the abundance of prey made available when the fields are plowed. Swainson's hawks breed in western North America and winter in Argentina. Populations of this hawk have declined by 90% since the 1940s; only a few pairs of Swainson's hawks nest in the Tulare Basin.
Burrowing Owl (Athene Cunicularia); California Species of Special Concern 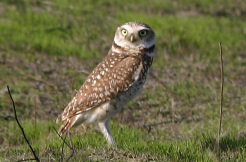 The burrowing owl is a small ground-dwelling owl with a round head, white eyebrows, yellow eyes, and long stilt-like legs. The owl is sandy colored on the head, back and upperparts of the wings and white-to-cream with barring on the breast and belly. An opportunistic feeder, burrowing owls eat beetles and grasshoppers, as well as small mammals, such as mice and gophers. They occasionally prey on reptiles, amphibians, scorpions, young cottontail rabbits, bats, and other birds. Commonly seen perching on fence posts or on top of mounds, burrowing owls inhabit open, dry grasslands and edges of agricultural fields. As their name suggests, burrowing owls nest in burrows in the ground, often in old ground squirrel burrows. These owls range throughout western North America, from Canada to Mexico and east to Louisiana, but in California, they are declining. The Tulare Basin features one of the largest populations of this species in the state.
top
Western Yellow-billed Cuckoo (Coccyzus americanus occidentalis); State Endangered 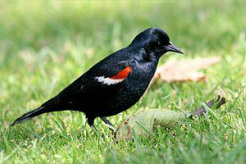 Tricolored blackbirds closely resemble red-winged blackbirds, but have red and white shoulder patches. Tricolored blackbirds feed on grasshoppers and other insects, a variety of invertebrates and grain. This bird inhabits cattails or bulrushes in freshwater marshes, uplands, and agricultural fields with grain crops or alfalfa. Tricolored blackbirds breed in large colonies of up to 100,000 nests. More than 95% of tricolored blackbirds live in California, with the largest colonies historically located in the Central Valley. Since the 1930s its numbers have declined by more than 50%. In parts of the Tulare Basin, tricolored blackbirds depend on row crops, such as triticale for nesting and pasture land for foraging.
Buena Vista Lake Shrew (Sorex ornatus relictus); Federally Endangered 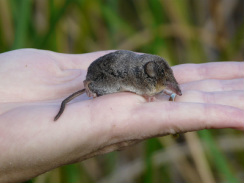 The Buena Vista Lake shrew, one of nine subspecies of the ornate shrew, features a long snout, tiny bead-like eyes, ears that are concealed by soft fur, and five toes on each foot. It is approximately the size of a small mouse. While the specific feeding habits of the Buena Vista Lake shrew are unknown, in general, shrews feed day and night on invertebrates to maintain their extremely high metabolic rate. This animal lives in dense vegetation made up of cottonwoods, willows, grasses, and rushes around the perimeter of marshes, lakes, or sloughs. Found only in the southern part of Tulare Basin, Buena Vista Lake shrews historically lived in the wetlands around Buena Vista Lake and other lakes in the Basin. Only a few isolated populations of this unique mammal remain today in the Basin.
top
Tipton Kangaroo Rat (Dipodomys nitratoides nitratoides); Federally & State Endangered 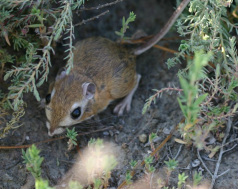 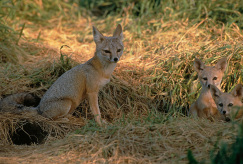 The smallest fox in North America, the San Joaquin kit fox is lightly built, with long legs and large ears and grows to approximately 20 inches long. Its coat ranges from tan to buffy-gray in the summer to silvery-gray in the winter; the belly is white and its bushy tail black-tipped. The San Joaquin kit fox preys on small mammals, such as kangaroo rats, pocket mice, and white-footed mice, but also eats ground-nesting birds, insects, and grasses. This animal inhabits grassland and scrubland, as well as oak savannah. Kit foxes either dig their own dens or use those constructed by other animals, and readily adapt to human-made structures for temperature regulation, shelter from adverse weather, and protection from predators. Found only in California, San Joaquin kit foxes historically inhabited most of the San Joaquin Valley, from Contra Costa County to Kern County. The Tulare Basin continues to provide important habitat for small numbers of this charismatic animal today.
top